There wasn’t much accomplished this year because it was a birth year. But my frustration by that has faded. I have chosen to be gentle with myself because I had a baby. There were raging hormones to deal with. Some days I couldn’t get off the couch. My home didn’t look like a magazine. I didn’t run a 5K. I didn’t journal. No photos were printed. I didn’t have a nice garden. But looking back I’ve come to realize it was a good year.

The First 6 Months of a Birth Year

The first half of the year, I was fighting with myself over what I wasn’t getting done. I struggled with who I thought I should be as a mother of two. I pouted off and on over the things I wished I could be doing. At least two weeks of every month I was completely exhausted. A good day was one where I nursed and threw a peanut butter sandwich in front of Keaton for lunch.

It’s hard to describe the panic that comes when you know what you want to accomplish, but don’t have the energy to do it. It feels like those nightmares where something is chasing me and I can’t run. There is already so much more work with a new baby, and yet it seems so much of the time is spent sitting.

I’,m overwhelmed with feelings of guilt from the judgements I passed on other mothers before I had children. I wish I had looked with compassion on mothers with crumbs under the table. I’ve had to accept, that behind every grumpy, new mom, there is someone fighting harder battles than I knew was possible. After 3 months I felt like life was gaining rhythms and patterns, but then the second hormone fluctuation happened. It knocked over all the progress I had made so far. Then when I felt at my lowest, I lost all my hair. (Hello, Pixie Cut)

I thought I knew what it was like to be a mother when I had Keaton. Everyone said that it counted. (In its own way it did.) But I never paused to consider that with a second baby “sleeping when the baby sleeps” wouldn’t always be an option.

I remind myself that this was a good because it is the year that I brought Cedric into the world. He was nurtured and loved this first year. I found healthy ways to deal with feeling overwhelmed and hormones. I’ve gained empathy for every other pregnant or nursing mother that I will deal with. Most of all I have learned that I need to plan to be “not me” for 18 months after having a baby.

My goal for this year is to tank up on productivity, gardening, purging, and beauty, so the next 18-month phase of growing a little human will be easier and more beautiful!

Takeaways from a Birth Year – Updated 2019

Later this year, I realized that my high and low energy days actually had patterns. We started scheduling to maximize on rest certain times of the month, and proper socialization other times of the month. This practice didn’t make life perfect but helped it to be predictable, and manageable. You can read about that here. Managing Postpartum PMS symptoms

You may also enjoy:

So much of the motherhood experience isn't pretty, but I have found when I focus on the sunshine in my nest, gratefulness follows.
I love decorating our nest with gentle minimalism, reading to our kids, and learning seasonal cycles and how it can make motherhood easier.
Feel free to email me at anytime with questions at sunshineinmynest@gmail.com 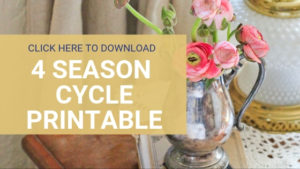